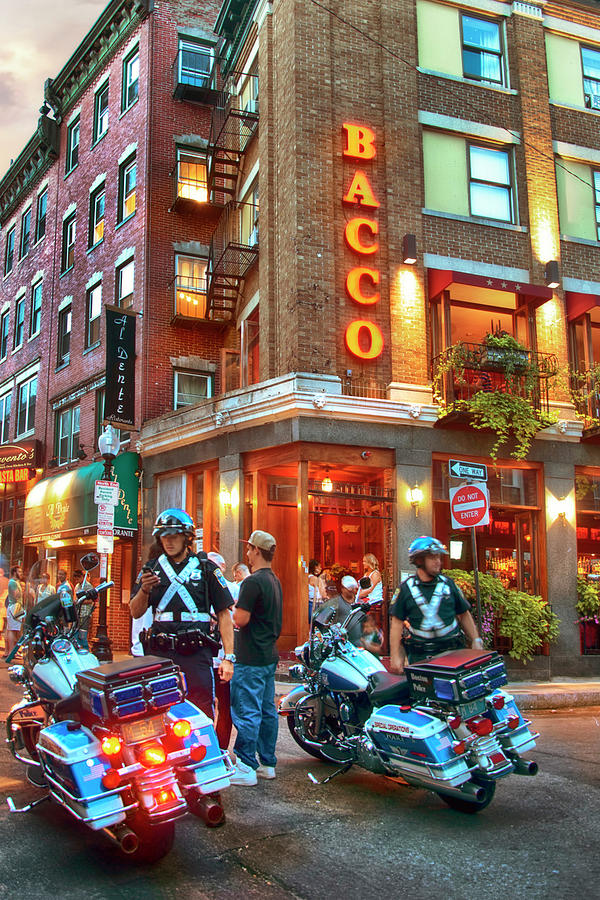 Bacco in the North End Boston

Bacco in the North End Boston

Bacco restaurant is proclaimed by the critics as one of the most romantic restaurants in Boston. Steps away from the Old North Church and Paul Revere's house. Bacco offers a contemporary and elegant atmosphere, showcases classic and regional Italian dishes with a modern flair. Bacco features a convivial bar with beautiful mahogany floor to ceiling windows overlooking the freedom trail.

The colorful streets of Boston's historic North End on a beautiful summer Sunday. Below is a brief and very interesting history of the North End from the "Boston's Neighborhoods Network".


The North End, often called Boston's "Little Italy," is a one-square-mile waterfront community, bordered by Commercial and Causeway Streets and Atlantic Avenue, located within walking distance of Boston's financial district and Government Center. A highly desirable residential area for professionals who work nearby, the neighborhood also is a major attraction for tourists and Bostonians alike, who come seeking the best in Italian cuisine and to enjoy the decidedly Italian feel of the region. Hanover and Salem Streets, the two main streets of this bustling historic neighborhood, are lined with wonderful restaurants, cafes and shops, selling a variety of delectable edible goods. A trip to Boston would not be complete without including a meal at one of North End's over one hundred fine Italian restaurants.

The North End is a vibrant community that beckons both tourists and residents to enjoy its bounty. The many Genovese, Sicilian, Milanese and Neapolitan immigrants who originally settled here moved onto streets where others from the part of Italy that they called home had settled. In these enclaves, the distinctive dialects, history, and traditions of the regions in Italy from which they came were carefully preserved, and the patron saints of those regions of Italy are celebrated during the summer months in the North End even today. It is a unique treat to witness one of the many festivals celebrating the saints that occur every weekend throughout the summer.

When the first British settlers came to the North End in the early 1600s, the region was a narrow peninsula surrounded on three sides by water. Humble thatched-roof cottages, set amidst gardens and pastures, soon dotted the landscape. Later land was added to the region by filling in Mill Pond with soil from the top of Copp's Hill and Beacon Hill. Subsequent landfill projects have extended the shoreline even more, expanding the North End to a size far greater than in Colonial times.

The first residents of the North End worked at a variety of crafts (e.g., carpentry, shoemaking) from their homes. Their Puritan religion required obedience to a very strict moral code and there were severe punishments for infractions. For example, one man was whipped for kissing his wife in public upon his arrival from a long sea voyage. Two Puritan religious leaders of the period, Increase Mather and his son Cotton Mather, are well known for having stirred up fears that ultimately led to the Salem witchcraft trials. The Mathers are buried in the North End's Old North Cemetery on Copp's Hill. The early residents of the North End also included slaves who lived in an area called "New Guinea," after the region of Africa from which they had been brought. Some of them are buried in Old North Cemetery as well.


By the 18th century, many prominent people of British ancestry had settled in the North End, working in the mercantile and shipping industries and building beautiful mansions there. These people helped develop the area in important ways. During this period, for example, Charles Bulfinch, the famous architect, built a beautiful church, since renamed St. Stephen's, which still stands today. The Eliot School, the oldest elementary school in the United States, was founded at this time as well. Later, in 1740, Peter Faneuil donated funds to build Faneuil Hall adjacent to the North End. The building was designed to serve as a town hall and marketplace for Boston. Because some of the meetings held at Faneuil Hall figured prominently in the American Revolution, it is often called the "Cradle of Liberty." Once gutted by fire and rebuilt, Faneuil Hall and Quincy Market continue to be must-see landmarks for tourists to Boston. Another landmark in the North End is the home of Paul Revere, one of the participants in the Boston Tea Party, who is most famous for his ride from Boston to Lexington and Concord to warn the Patriot leaders that the British were coming.

At the end of the war, many of the wealthy residents of the North End, those who remained loyal to Britain, left the area, either returning to England, or moving to eastern Canada, or to other parts of Boston or the suburbs. Within a few decades, the region went into decline as wave after wave of poor immigrants - Irish, Jews, Portuguese, and Italians - crowded into the North End. By 1800, the large mansions had become run down and were replaced by tenements and lodging houses to serve as residents for the newcomers. In addition, warehouses and dockyards were built in the area for shipping which had become the major industry of the region and the quality of life in the region changed as sailors, who needed to unwind after lengthy periods at sea, also flooded in. Prostitution, drunkenness, gambling, and crime were rampant in the area. As one observer wrote in 1872: "The North End was once the most important part of the town, containing not only the largest warehouses and public buildings, but the most aristocratic quarter for dwelling-houses. But this was a long time ago. A large part of the North End proper has been abandoned by all residents except the poorest and most vicious classes."

The first Irish immigrants came to the North End in the 1840s. Their numbers increased rapidly after 1847, which was the year of the potato famine in Ireland, and finally peaked around 1880. The Irish residents of the North End experienced severe job discrimination, which kept them in extreme poverty, with living conditions that promoted the rapid spread of illness and very high mortality rates. Large families lived in single-room apartments. The most fortunate found jobs as laborers working on the railroads, as maintenance workers, in construction, in factories, or as domestics.

Around mid century, Jewish immigrants, forced by hardships in Eastern Europe arrived, joining the Irish in the North End. The new arrivals were supported by relatives and acquaintances who helped them out until they could get on their feet. Many of these immigrants were skilled tailors working in the clothing industries. Others worked as peddlers, buying small items that people needed for day-to-day life on credit and selling them at a small profit. These peddlers often had to spend many days on the road away from their family and friends. Those who were successful acquired real estate and/or opened their own shops. But by the 1920s most of the Jewish residents of the North End had moved to other areas of Boston or the suburbs.

The first Italians arrived in the North End in the 1860s, forced by unbearable conditions in the homeland and their numbers grew in the 1880s and 1890s. Most were unskilled laborers. Although many of the first Italian immigrants worked as vendors of fruits and vegetables, later many found work in commercial fishing, in shipping, in construction (e.g., building subways), and as peddlers and shopkeepers, selling the food, clothing, and services needed by other residents of the North End. Like the Jewish immigrants to the North End, they sought help from family members and acquaintances from the same regions of Italy who had already established themselves in the area. Over time, this resulted in enclaves of residents living together on streets segregated by the region of Italy - Sicily, Milan, Naples, and Genoa - from which they had come and preserving its language and customs as well. Over the next decades, the Italian population of the North End increased and other immigrant groups moved elsewhere. By 1900, Italians had firmly established themselves in the North End, and by 1930, the North End was almost one hundred percent Italian.

The Italian population in the North End has gotten smaller in recent years with sky-rocketing property values that have forced many of the less affluent residents to move elsewhere. Increasingly, the residents of the North End are young professionals attracted to the area by its proximity to their downtown offices, by the North End's narrow streets and brick buildings, by its safety and sense of community, as well as by its decidedly European ambience. Although Italians presently make up less than half of the population of the North End, its old world Italian flavor is preserved the region's language, music, cuisine, and customs.

I must go here the next time I am in Boston!! L/F and Featured!

Yes you must visit Elizabeth..thank you:)