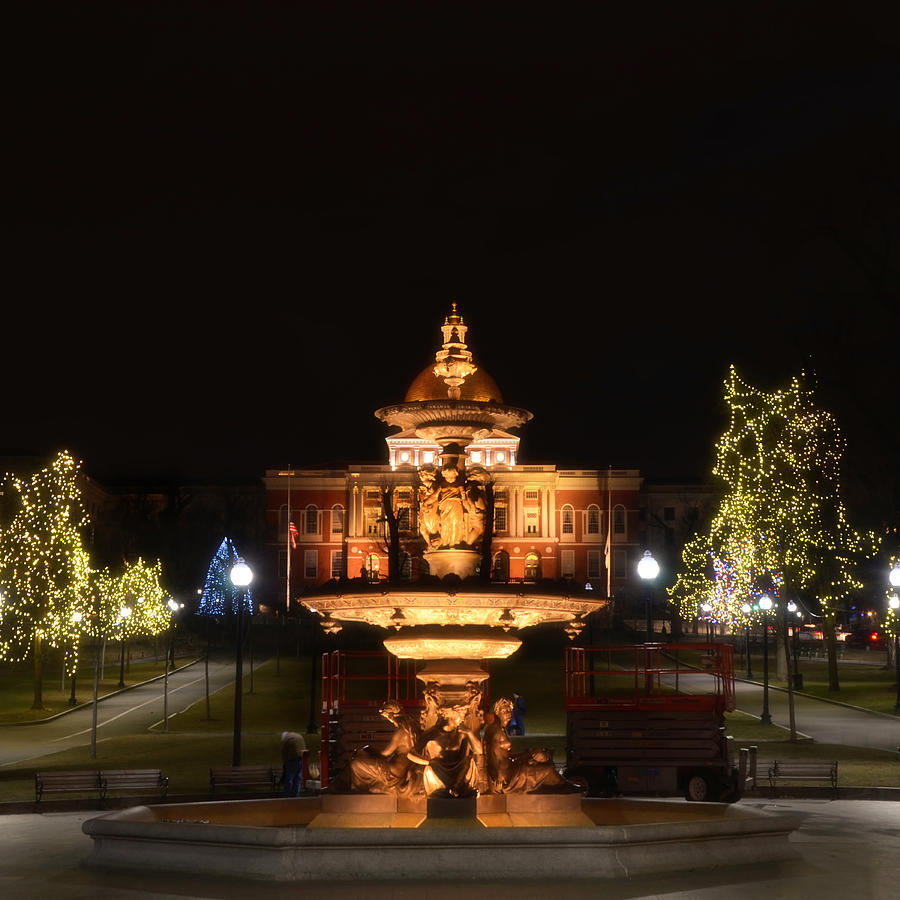 Built in 1798, the "new" State House is located across from the Boston Common on the top of Beacon Hill. The land was once owned by Massachusetts first elected governor, John Hancock. Charles Bullfinch, the leading architect of the day, designed the building.
The dome, originally made out of wood shingles, is now sheathed in copper and covered by 23 karat gold which was added to prevent leaks into the State House.
In the House of Representatives chambers hangs a wooden codfish which is called the Sacred Cod. The Sacred Cod signifies the importance of the fishing industry to the Commonwealth. At the top of the golden dome sits a wooden pinecone which symbolizes logging in Boston during the 18th century.

One of the most conspicuous objects on Boston Common, standing near the corner of Park and Tremont Streets, is the Brewer Fountain.
The fountain was a gift to the city by Gardner Brewer, which began to function for the first time on June 3, 1868. It is a copy, in bronze, of a fountain designed by French artist Liénard [Jean Auguste Edouard Liénard, most likely]. The fountain was sculpted for the Paris World's Fair of 1855 [Exposition Universelle de 1855], where it was awarded a gold medal.
The great figures at the base represent Neptune [Roman God of water and sea] and Amphitrite [Greek sea Goddess], Acis [spirit of Acis River by Roman Poet Ovid] and Galatea [Roman sea nymph]. The fountain was cast in Paris, brought to this country, and set up at the sole expense of the public-spirited donor. Copies of iron were made for the cities of Lyons and Bordeaux; and an exact copy, in bronze, was made for Said Pacha, a late Viceroy of Egypt.

Gardner Brewer Fountain
About Gardner Brewer, he was born in Boston in 1800 and died in Newport, RI in 1874. He was one of the wealthiest and most liberal of Boston merchants. After attaining his maturity he was for some time a distiller, but afterward engaged in the dry-goods trade, and founded the house of Gardner Brewer & Co., which represented some of the largest mills in New England, and had branches in New York and Philadelphia.
In the dry-goods business, by accurate method combined with great sagacity, he accumulated a fortune which, at his death, was estimated at several million dollars.