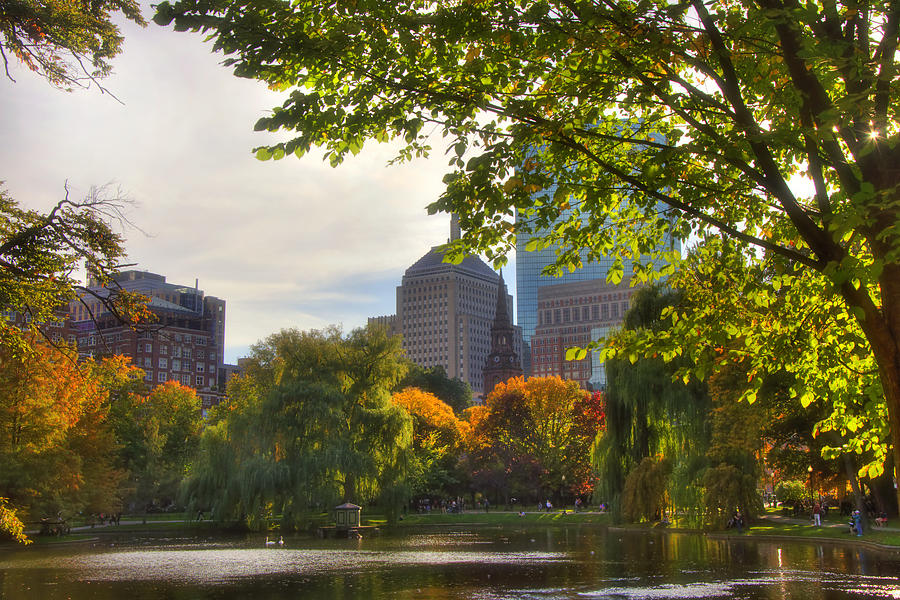 Cityscape view of Boston skyline from the Public Gardens in the height of the Autumn season.

Two centuries separate the creation of the Boston Common and the Public Garden, and what a difference that period made.

In 1634 the Common was created as America's first public park; it was practical and pastoral with walkways built for crosstown travel. In contrast, the Public Garden was the first public botanical garden in America. It was decorative and flowery from its inception, featuring meandering pathways for strolling.

The Victorians ushered in the style of park which featured the gardener's art. They designed vibrant floral patterns in the Garden which utilized new techniques of collecting, hybridizing, and propagating plants. With access to showy annuals and greenhouse-grown plants they bedded the Garden with colorful displays and planted exotic imported trees. George Meacham used these new techniques to win the public design competition held for the Garden, for which he received a $100 prize.
In the early days, some complained that the unnatural combinations of colorful plants were garish beyond the bounds of good taste. Now Boston calls the Public Garden one of its greatest attractions.

The Parks Department maintains the Victorian traditions to the best of their abilities, so you can judge its beauty for yourself. Admire the rich and unusual plants, the Lagoon, the monuments and fountains, and the Swan Boats created and operated for over 100 years by the Paget family.
Boston Parks and Recreation Department grows all the plants used in bedding-out the Public Garden in their greenhouses. Over 80 species of plants are cultivated there for future plantings in the Garden and more than 50 other locations around the city. Due to the wide variety of plants and its romantic setting, the Garden attracts many weddings.

Congratulations on your sale.

I Admire all your photos, Joann! this one is amazing!

Thanks very much Jason:)

Congratulations on your new $ale Joann!

Congratulations Joann, on your Art sale!

Thanks very much Christina:)

Thank You for Submitting your Artwork.... Liked the subject, description, technique, composition, and color... So Today it was Published in the Internet publication ARTISTS NEWS.... YOU or Friends Can use Ctl-C to copy the link: http://paper.li/f-1343723559 and Ctl-V to put it into your the Browser Address bar, to view the publication. Then, Tweet, FB, and email, etc a copy of the publication, to just anyone you feel would be interested. Happy Promoting! :-)

Thank you Nadine and Bob!!